What is Common Core Math?

What is Common Core Math?
Since its inception in 2009 Common Core has been controversial to say the least. Misconceptions, confusion, resistance to change, and politics has muddied a rather simple idea. Let's take a moment to clear up some misconceptions.

Misconception: Common Core is the federal government telling the states what to teach.
The states led the development of the Common Core State Standards. This included governors and state commissioners of education from 48 states, two territories and the District of Columbia, came together and decided to develop common, college- and career-ready standards in mathematics and English language arts. They worked through their membership organizations – the National Governors Association Center for Best Practices (NGA Center) and the Council of Chief State School Officers (CCSSO) – to accomplish this. The development process included defining expectations for what every child should know and be able to do when they graduate from high school and then creating content standards for grades K-12 aligned with these expectations. States relied on workgroups of educators, representatives of higher education and other experts to write the standards with significant input from the public in 2009 and 2010. States then appointed a validation committee to review the final standards. The federal government was not involved in the development of the standards. Source: Common Core Standards @: http://www.corestandards.org/.
With the technical information out of the way the simpler reason for the Common Core is to raise the standards taught to prepare students for the modern world. The United States has fallen behind, particularly in math and science. The Common Core makes the much overdue shift in math from memorization to understanding.
Misconception: Common Core Math is "new" math.
In fact, most of it is quite old. For various reasons math over the last 70 years has become a series of algorithms and memorized rules. In fact, partial product multiplication (a Common Core method) was the way multiplication was taught in schools until World War II. In order to speed things up for manufacturing, they began teaching the faster algorithm and we have never gone back. Common Core is designed to first build an understanding of mathematical concepts in students and later introduce the memorization of faster algorithms.
Question: What is an algorithm?
Simply put, in math an algorithm is a set of steps designed to solve a problem. A formal definition might be a procedure or formula for solving a problem, based on conducting a sequence of specified actions. When you add or subtract multi-digit numbers and regroup (carrying or borrowing) you are using an algorithm, when you multiply multi-digit numbers and regroup or use long division you are using an algorithm.
Question: Algorithms are faster and easier, right?
For the most part absolutely. This is why they were created. Then why are we delaying teaching students algorithms and forcing different slower methods? Because we have raised generations of Americans who have limited mental math capabilities and limited understanding of math concepts. For example, can you explain what is happening when you do a long division algorithm? Or do you just remember, Divide, Multiply, Subtract, Bring Down? Or maybe you remember Dead, Monkeys, Smell, Bad. The point is when a student can divide 438 by 6 in their head, using their understanding of place value and math facts, they are becoming mathematically proficient students. When they memorize the algorithm they become good memorizers. Of course at some point in around 8th to 9th grade we give them a calculator. So if you only want to teach for speed, skip right to the calculator.
Misconception:I have seen Common Core question on tests or worksheets and they are ridiculous.
This is impossible. Common Core Standards are just standards, or what students need to be proficient at by a certain grade. Curriculum (books, tests, worksheets) is completly district-based, school-based, and teacher-based. They can be flawed or ridiculous. In addition, just because a teacher is teaching Common Core, it doesn't mean they are doing it well nor doing it right.
Misconception: Students are failing because Common Core is too hard and too different.
The Common Core Standards are indeed more difficult than previous standards.
In order to keep up with the rest of the world, the United States must make the change, one of which includes more rigorous standards in mathematics. Students are not failing at a higher rate, but many teachers and parents are having difficulties learning new or different ways than they were taught as children. 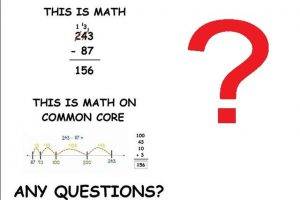